In this daily article we read on EPA accused of ‘suppressing’ hazardous formaldehyde report. Here is the article below: 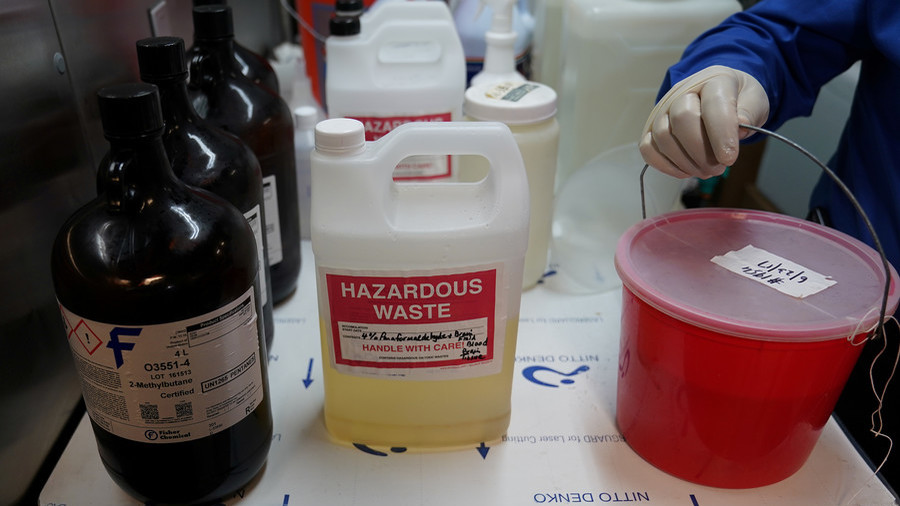 Environmental Protection Agency (EPA) officials have accused staff appointed by departing agency head Scott Pruitt of suppressing a report warning that most Americans are exposed to hazardous levels of formaldehyde.

The draft report was completed by EPA scientists over a year ago. It claims that most Americans inhale enough formaldehyde vapor day-to-day to put them at risk of developing leukemia, nose cancer, throat cancer, and other ailments, Politico reported.

Formaldehyde is commonly used in the manufacture of wood composites and resins, like those found in cabinets and furniture. It can also be found in some disinfectants, food preservatives, cosmetics and cigarettes. Humans can also be exposed to its vapor by inhaling the emissions of refineries.

Formaldehyde is already “known to be a human carcinogen” by the US National Toxicology Program, but the EPA’s delayed report could potentially reveal harmful effects at lower exposures. This could lead to tighter regulations on manufacturers, new workplace exposure guidelines, or class-action lawsuits from people unwittingly exposed to the chemical.

Two anonymous officials said that Pruitt’s political appointees at the agency are “stonewalling” the report, delaying its release at “every step of the way.”

The report was authored by the EPA’s Integrated Risk Information System (IRIS), a politically independent body of around 35 scientists within the agency. After IRIS completes a study, a report is then sent to the National Academy of Sciences (NAS) for review. After passing muster with the NAS, the report can then inform policy.

In the case of the formaldehyde report, the NAS has already been paid $500,000 to carry out the review. The EPA has thus far refused to hand over the report, however.

The anonymous officials, who spoke to Politico, blame Pruitt’s appointees and industry lobbyists for the delay. The appointees, they say, are cancelling briefings on the report, and refusing to let staff carry out important revisions on it without permission. Meanwhile, lobbyists like the American Chemistry Council (ACC) have written to the agency, warning against releasing the report “prematurely” and urging IRIS to incorporate industry-funded research downplaying the risks of formaldehyde.

Nearly a million jobs “depend on the use of formaldehyde,” the Council’s letter stated.

In response to the Politico story, the ACC released a statement on Friday calling the draft IRIS document “closer to science fiction than sound science.”

“Incredibly, the IRIS program would have you believe the amount of formaldehyde humans produce and exhale – in every single breath – is dangerous and could cause leukemia. There is no scientific evidence to support that outrageous allegation,” the ACC said.

Members of the American Chemistry Council include Exxon Mobil and Georgia-Pacific Chemicals LLC, and the organization has previously lobbied against IRIS. Nancy Beck, head of the EPA’s chemical safety office and a Pruitt appointee, is a former employee of the ACC.

“If the administration was really keen on protecting public health, why wouldn’t they send this to the National Academy and give it a really good review?” asked one former EPA official. “If it survives that review, then there’s a public health problem that needs to be dealt with, and if it doesn’t survive the review, then they can point the finger at IRIS and say, ‘You’re dead.’”

“Because formaldehyde can be found in everything from wood products to women’s hair straighteners, the public health risks are substantial,” Senator Ed Markey (D-Massachusetts) said in a statement.

Pruitt resigned from the EPA on Thursday, citing “unprecedented” and “unrelenting” attacks on him and his family. During his tenure at the agency, Pruitt was hounded by negative news stories. Earlier this week, he was confronted in a Washington DC restaurant by a teacher and activist who urged him to resign “before your scandals push you out.”

As head of the EPA, he presided over substantial rollbacks of environmental regulations, as well as the US’ withdrawalfrom the Paris Climate Accords.

Former EPA deputy Andrew Wheeler will be the agency’s new acting chief as of Monday, and looks set to continue in the vein of Pruitt. A former coal lobbyist, Wheeler was staff director for the Senate Environment and Public Works Committee in 2004 when Chairman Jim Inhofe (R-Oklahoma) tried to delay an earlier report on formaldehyde.

Already, Democrats have shifted their pressure campaign from Pruitt to Wheeler.

So I hoped you like the article - the original link is: