In this daily article we read on Andropause: life stage or end of manhood. Here is the article below: 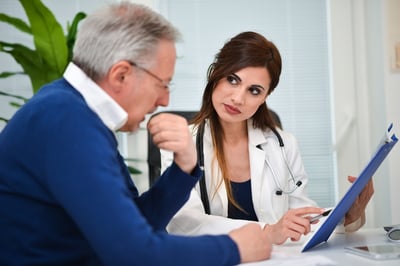 In the past, short of erectile dysfunction, male reproductive and endocrine issues were rarely discussed. With the advent of the internet, however, and a sudden interest in the repercussions of diminishing testosterone levels, the conversation is happening.

Just as with female hormone production, male hormone production also wanes with age. This time of hormonal decline is most commonly referred to as andropause. Other terms are interchanged in literature, articles and texts and include hypogonadism, late-onset hypogonadism, male menopause, male climacteric, androclise, androgen decline in aging male and aging male syndrome. For women, menopause means a halt in menses, which signals a departure from childbearing years, and the beginning of a new life phase. In Greek, “andras” means human male, and “pause” means cessation. So, andropause literally means “human male cessation”. Reduced testosterone levels have been associated with night sweats, decreased libido, dry hair and skin, trouble concentrating, muscle loss, insomnia, anxiety and/or irritability, reduced bone integrity and insulin resistance. In summary, these symptoms add up to what may feel like “human male cessation”.

Multi-Mechanisms of Action of Testosterone

Drawing closely to the actions of estrogen and other androgens/sex hormones, testosterone can act as three different hormones or cellular messengers. It can bind directly to androgen receptors; act on the peripheral tissues such as the prostate and hair glands where 5-alpha-reductase is commonly found, producing dihydrotestosterone that also binds to androgen receptors; and be converted to estradiol, which acts on estrogen receptors in bone and abdominal adipose or fat tissue. These roles are essential in maintaining libido, fertility, healthy weight, bone health, and general well-being.

Symptoms of low testosterone (Low-T) can be very subtle and can slowly develop into more serious concerns, as well as affect a man’s quality of life. Also, hypogonadism can occur in younger men, but rarely, with reports of 3.1–7.0% in men 30–69 years of age, and 18.4% in older men. Only about 5.6% of 30 to 79-year-old men experience symptomatic androgen deficiency. In addition to a natural aging process, low testosterone levels may also be a biomarker for an underlying condition. For example, metabolic syndrome and testosterone deficiency are closely linked. Studies have shown that low testosterone levels may be associated with obesity, insulin resistance and dyslipidemia in men. Conversely, men with metabolic syndrome and type 2 diabetes have a higher prevalence of hypogonadism.

Unlike menopause, where women’s estrogen levels plummet suddenly, total testosterone levels decline at an average rate of 1.6% per year once a man reaches 40 years of age, while free and bioavailable levels fall by 2%–3% per year. Although the decline can be persistent and steady, about 50% of men over 80 still have total serum testosterone within normal conventional levels. Also, fertility is not affected in men the same way as post-menopausal women.

According to the British Medical Journal (BMJ), the best estimate of the prevalence of Low-T comes from the European Male Ageing Study. Measuring a combination of sexual symptoms and testosterone levels, they found that only 0.1 percent of men in their forties, 0.6 percent in their fifties, 3.2 percent in their sixties, and 5.1 percent of men in their seventies would meet the criteria for a Low-T diagnosis.

In spite of data suggesting “Low-T” may not be as prevalent as we think, the quest to boost testosterone levels is. Testosterone replacement therapy (TRT) continues to be a popular (and controversial) treatment considered by endocrinologists and urologists when hypogonadism is detected. Some studies have found it a viable choice, while others shed light on a variety of concerns and contraindications. An observational study in 2012 compared mortality of men over 40 with low testosterone who were treated with TRT to those who were not treated. It turned out the mortality rate of the men not treated with testosterone was higher (20.7% compared to 10.3%). Although the study was encouraging for TRT, it was not a gold-standard, placebo controlled randomized clinical trial and did not account for confounders.

Also, TRT has been shown to improve insulin resistance, dyslipidemia and sexual dysfunction in men with Low-T, although there have been no long-term studies to assess its overall effect on mortality. In individuals with prostate or breast cancer, TRT comes with risks. In fact, guidelines from the Endocrine Society suggest not using TRT with prostate cancer, a palpable prostate nodule, or an elevated prostate-specific antigen (PSA) test with results more than 4 ng/ml. Even men with a family history of prostate cancer are steered away from this type of treatment.

Although declining testosterone levels are normal with aging, many men fear andropause or “male cessation”. The loss of muscle mass alone prompts men to search for solutions. Steroids help build muscle by increasing testosterone, but they deleteriously affect the liver, prostate, heart and sex organs. Selective androgen receptor modulators (SARMs) are marketed to athletes and gym-goers as an alternative to anabolic steroids, but also come with their own risks and concerns. Many also decrease natural testosterone production because they modify the chemical structure of testosterone.

Therefore, some lifestyle approaches worth exploring that may influence testosterone levels include diet, fitness, stress reduction and supplementation. A prerequisite for healthy testosterone levels include maintaining normal weight and supporting overall endocrine function. In addition to choosing a whole foods-based diet replete with healthy fats (hormone precursor) and fiber, some studies have found intermittent fasting (anywhere from 12-16 hours per day, including sleeping hours, without eating) as a way to help maintain weight and testosterone levels through the rebalancing of hormones. Fasting was found to elevate the luteinizing hormone (LH) by 67%, overall testosterone by 180% and enhance the growth hormone secretion in men. Fasting also helps to improve leptin levels, which bodes well for testosterone levels since the clinical condition most strongly associated with lowered testosterone is obesity, and normalizing leptin levels is critical for maintaining healthy weight. In terms of fluids, ample water intake, while reducing caffeine and alcohol consumption helps to bring hydration to the hair and skin as well as reduce fatigue. Physical activity at least 30 minutes per day promotes energy and general vitality.

All in all, Low-T may feel like the end of manhood, but the conversation about it is just beginning.

So I hoped you like the article - the original link is: http://blog.bioticsresearch.com/andropause-life-stage-or-end-of-manhood